The Downtown Planning Study (PDF) has been completed and is available for public review. The study was completed after more than one year of information gathering and meeting with key community groups.

Study Focus
The Downtown Planning Study focuses on many points of interest for Summit's downtown:
The study was conducted by Burgis Associates for the City of Summit Planning Board.

Public Presentation
There will be a public presentation of the Downtown Planning Study draft report on Monday, April 28 at the Planning Board meeting at 7:30 PM in Common Council Chambers at City Hall.

The presentation will be televised on Comcast TV 36 and Verizon Channel 33. Comments on the draft are welcome at the presentation on the 28th or by email.

Background
The City of Summit and its Planning Board are initiating a comprehensive planning study of downtown Summit and immediate surrounding areas, focusing on economic development, streetscape, parking inventory and strategies, marketing, signage and connectivity among other issues identified as important by residents and businesses.

Burgis Associates Contract
The City has contracted with Burgis Associates Inc., experts in planning in North Jersey, to establish a development strategy focusing on future land use, transportation, economic development and design standards. The plan will also study the expansion of the Downtown streetscape to adjacent blocks, while integrating pedestrian-friendly amenities and improvements on streets and alleyways to capitalize and build on its Transit Village characteristics.

Community Participation
On Wednesday, June 19, Mayor Ellen Dickson hosted a Town Meeting at City Hall.
The Mayor presented the following:
The meeting was well-attended by residents and members of the business and non-profit community, including Summit Downtown, Inc., the Chamber of Commerce, Historic Preservation Committee and Environmental Commission among others.

Input
Input will be used to create a viable action plan, expected to be released later this fall. Continued participation from the community is essential to the creation of an on-target, and meaningful plan.

A second town meeting focused on parking in the downtown was held on Thursday, October 17 at 7:30 p.m. in City Hall Council Chambers. A presentation on downtown parking and signage was made.

Ongoing feedback is encouraged via email. 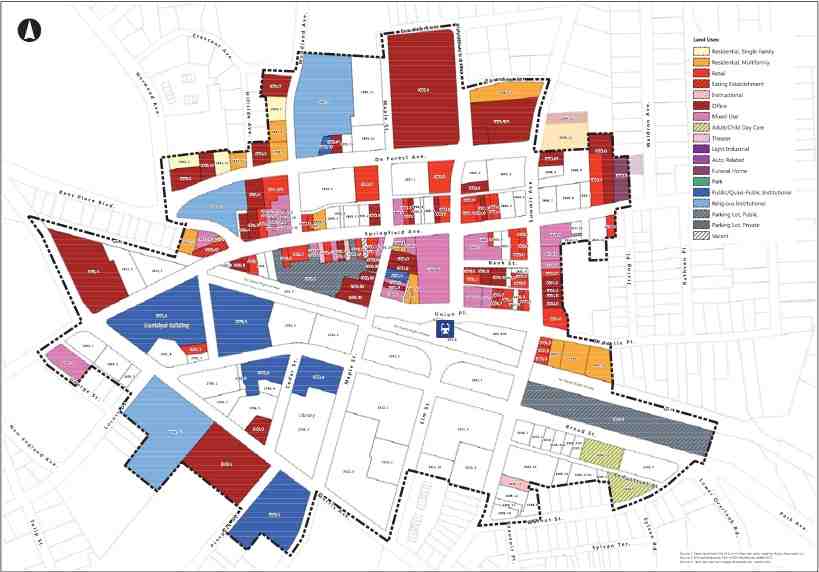